Earlier this year I took the Dynamic Sketching 1 Class at CGMA with Peter Han and would like to share my experience just in case anyone out there is looking to take the class too.

Expectations for Class: Drawing was feeling rusty and was hesitating every time I would put my pencil to paper, so wanted a class to kick off better habits and overall just draw more confidently.


Week 1 - warm up exercises for drawing and material introduction

First class was all about the tools (pens), paper and learning how to use both. And NO pencils. I am used to drawing with pencil first and figure things out before inking, so I realized real quickly this class was going to challenge me in more ways than I had expected.

First exercise was repetition of straight lines, circles, and curves to start to build muscle memory and get used to the pens.

Next we practiced the same lines but by creating forms, both organic and rigid. Added interior lines to help define the volume of the shape and also learned to make the outer line thicker to help it stand out against surrounding shapes. Last part of this exercise was to slice the shape and use textures to help define how the inside looks.

Putting lines down started to feel a bit more comfortable at this point while we practiced perspective. Coming up with textures was really fun and really challenged my pen techniques. Also this week we were shown how to use a light gray marker to lay the ground work and then go over with the black pen. This was kind of replicating how I usually would use a pencil first, but still had to really think and visualize what I wanted to draw before putting down lines since still can't erase.

This is where everything we have done so far all started to come together. Organic forms, defined by texture/highlights and now started to add shadows to help it put in space.

I especially liked this exercise! It was very therapeutic to add the textures to the shapes, and since it was just a blob and not a character made it easier to focus on getting the form right.

Week 5 - use of markers and additional materials to create better sense of depth, volume, and textures

Now out of our heads and back to real life -- time to draw plants! It was a great next step putting all of our new skills to use. Peter really stressed this week about thinking of our sketchbook pages as our thoughts; figuring things out, simplifying, writing notes, and the like.

The process we went through for each drawing would go something like this:

- What is the basic shape? (thinking about simplifying the overall shape and pushing it to be more appealing) These drawings would be smaller.
- Once replicated the desired shape a bit larger with a gray tone marker, then would go in and start defining the plant. Is there an overall shape for the leaves or is it simple enough to do individual or bunches of leaves? How simply can things be defined without over complicating the plant? The goal is to communicate the idea of the plant, not render every detail.
- Next step is further defining the shape with the textures. The leaves for example can be rendered in a way to help define the depth of the bunch of leaves. Front/mid/back all have a different way of being rendered that will help with depth. It was a great challenge to explore different ways to render the leaves and try to find the simplest way to accomplish the look and feel I wanted.
- Heavier line around the outside to help define the shape and make it pop.
- Add highlights to where the light is hitting it the hottest!

More plants! Same exercise, but now bringing in some color in. This demo of Peter's stood out to me because I have never seen anyone use markers like he does.

The idea of adding the color was to layer it onto what we were already doing, and NOT fully render it. I laid the color on a little to heavily for most of the plants bringing them more into the rendered zone. This was a difficult concept for me to grasp.

Now on to the final assignment! Now taking everything we have learned and applying it to a character design.

This is my shark, he is different from the other sharks. He's vegetarian, so lives mostly on seaweed and algae, which has tinted him green. The other sharks think he's a weirdo and aren't really sure what to think of him, so naturally they pick on and bully him. He has had to adapt to his situation and in order to survive he has to hide in the coral to go unseen. He has made many fish friends who help him do this.

I had a lot of fun this week playing with shapes and ways to change the proportions to get different looks.

Pushed my favorite design further and explored other angles and expressions to further figure out who he is. The final character sheet and rendering was a lot of fun to do! 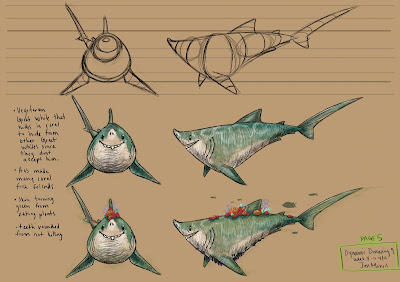 Thoughts on Class: There was a TON of drawing done in this class, what you see above isn't everything. So I really had to draw everyday to keep up with the assignments. This was a great practice to get back into. Early on I wasn't sure how much I was getting out of this class and though enjoyed the exercises, I was yearning to draw characters. I felt some improvement throughout, but it wasn't until I was finished with the class that I fully felt the benefits of everything we did. I was drawing so much faster and way more confidently! I also now prefer to get sketches down with pens instead of pencils, leading to better more appealing drawings.

I also love that it was a MUST to draw on paper and didn't even have the option to draw digitally untl the very final piece. There really is something special that happens when you draw on paper that you just can't get on the smooth surface of a screen. It was great to hear Peter feels similarly.


Peter Han is a fantastic instructor and I highly recommend this class for anyone that is looking to draw more confidently and learn a ton of techniques.

Please visit my website for most up to date info and work. Thanks!
www.jess-morris.com 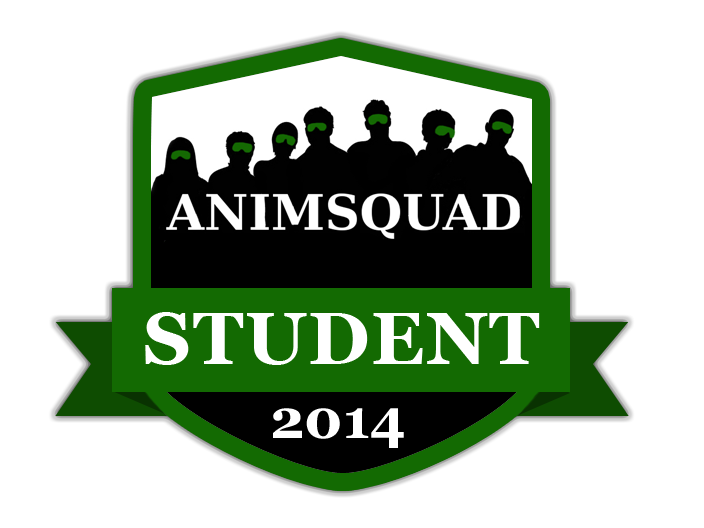 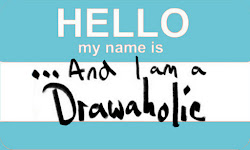